“This is struggle is not just for Rio Blanco, not just for the indigenous,” explained a Lenca woman as she approached her town’s sacred river, “but for the whole country, for the entire world. For Mother Earth.”

Armed authorities block path of protesters during a march in Rio Blanco on February 20, 2016. Photo: Witness for Peace

This is how one resident of La Tejera, Rio Blanco put it, walking towards the Gualcarque River along a road built by a private company–one that has interrupted traditional life and threatens the ecosystem that surrounds the Lenca in Rio Blanco. The private Honduran company DESA-Agua Zarca is constructing the Agua Zarca dam along the Gualcarque River in Rio Blanco, Intibucá located in southwestern Honduras. According to the cosmovision of the indigenous Lenca, there are feminine spirits that live and guard the Gualcarque River and that is what makes it sacred and why they have defended it for centuries.

Life in Rio Blanco before the project wasn’t exactly easy, but at least it was less conflictive. The residents of La Tejera we met with are humble, hardworking campesinos that live off of growing corn, yucca, pineapple and coffee. Every aspect of their lives fundamentally depends on the health of the river. The indigenous love, respect and watch after their sacred source of water and life. Thus,  when “No entry” signs appeared along the river when the dam project began, this was something that was simply unaccepatable.

The damage to the river caused by the project is visible; from the road the company built that altered the natural landscape, to the now unfertile soil along the riverbanks, the rubble in the surrounding area and the lowered water levels resulting from diversion of the river’s waters. From the beginning, the National Civic Council of Popular and Indigenous Organizations (COPINH in Spanish) has accompanied the process of defending land and ancestral rights. This struggle has meant the loss of lives and yet, the people who lead it remaim comitted, putting their lives on the line to defend their sacred river.

Maycol Ariel Rodríguez García,15 years old, was tortured and found dead with visible physical wounds and injuries on Oct 29, 2014. Maycol was part of a land recuperation process and his murder was made out to be an accidental drowning. The murderers have not been identified and the status of the investigation of the murder is unknown.

María Santos Domínguez, Coordinator of COPINH in Rio Blanco was nearly murdered on March 5, 2014 when she returned to her home and was surrounded and attacked with sticks, stones and a machete by a group of seven individuals. Her husband and her son came to her rescue but were also attacked. She continues to be under death threat for her leadership role.

Tomás García, COPINH leader, was murdered on July 15 was shot and killed by a Honduran soldier – whose commanders are trained in the US School of the Americas; and his son Allan Garcia was shot and also nearly killed.

Following the U.S. backed coup in Honduras in 2009, the floodgates for selling off Honduran land and natural resources to transnational and national corporations blew open. For example, the coup government granted 47 hydroelectric dam concessions with a single law, without consulting the communities  that would be directly impacted and thereby violated international conventions including the International Labor Organization’s (ILO) convention 169 that requires the Honduran state to defend indigenous land and natural resources and prevent their forced displacement.

Moreover, the Agua Zarca project is considered illegitimate because in January 2011, the Mayor walked out of a community town hall meeting because the Lenca residents voiced their opposition to the project. However, the Mayor issued the dam permit and uses forged signatures from community members to “prove” the community’s consent. In the last few years, continued resistance to the project has ushered in constant militarization by armed private security and state armed forces; murders and repression; the pulling out of the world’s largest hydropower construction company, Sinohydro, from the project; and the World Bank’s International Finance Corporation’s decision not to invest in the project due to the conflict surrounding it.

In response, DESA-Agua Zarca simply relocated its construction site to the other side of the Gualcarque River and proceeded to launch a two-pronged campaign strategy. Firstly, to defame, criminalize, and persecute the members of COPINH and any community in opposition to the dam project. According to COPINH, individuals have been hired to harass and intimidate those in opposition to the Agua Zarca dam project, creating a tense and repressive environment. Secondly, to buy community support through its social investment programming, funded in part by U.S. taxpayer dollars through the United States Agency for International Development (USAID) MERCADO project. San Francisco de Ojuera and Valle de Ángeles are two communities largely in favor of the dam and by no small chance happen to be the greatest beneficiaries of social programming provided by the company.

Given the continued repression and persecution on behalf of state and non-state actors, last Saturday’s demonstrators, mainly humble small farmers, subjected themselves once again to armed harassment and criminalization in order to defend their ancestral lands.

Observations from the mobilization of February 20th, 2016

On Saturday, February 20th, 2016, COPINH and the Rio Blanco community organized a demonstration denouncing the Agua Zarca hydroelectric dam project. Among the more than 100 individuals that participated in the mobilization included small children, the elderly, youth and even women carrying infants. Two women were visibly pregnant. Upon arriving at the police barricade, it was striking the sheer number of heavily armed military and police seemingly defending the interests of a private company while violating the rights of a humble and working class people: armed officials of the state who, according to the Honduran constitution, are to maintain peace and public order, not protect the interests of a private company.

The protesters’ right to freedom of assembly was repeatedly violated throughout the course of the march. Buses carrying the majority campesino demonstrators were detained by the authorities both before and upon arrival to San Francisco de Ojuera Additionally, there was a bulldozer which was placed in the middle of the road to prevent the passage of the vehicles and in the face of this shameful display, the local authorities refused to order the removal of the machinery.

The women present demanded the safe passage of the buses given that several among them were pregnant and some were carrying small children. Among the group were also elderly and sick individuals. Since the tractor remained unmoved, protesters decided to walk the long road to the DESA-Agua Zarca project site, but before they could do so, five soldiers with AK-47s and seven members of Los TIGRES joined the National Police. When a member of the COPINH leadership attempted to continue walking forward, a military official pushed him back aggressively and threatened to detain him for trying to pass the barricade.

The February 20th march was not the first time the right to assembly was violated in connection to organizing against the dam project. Following the murder of Tomás García the Inter-American Commission on Human Rights urged the Honduran government to respect the Lenca’s right to the freedom of assembly, stating: “demonstrations and protests are an expression of the right of association and freedom of expression, fundamental rights […] essential to the existence and functioning of a democratic society.”

“We’re unarmed…we demand the peace and freedom to move freely in our own lands. We are civil society.” – COPINH leadership

After nearly eight hours of walking, the protesters reached the DESA-Agua Zarca project site. As the buses had not been allowed to pass the initial blockade, the group arrived after sundown and were met by 15 National Police, eight TIGRES, five private security guards, and four army soldiers–the majority armed with high-powered assault rifles. Such a militarized response was excessive since the demonstrators had already been stopped and searched before the demonstration began. No weapons of any kind were found nor confiscated. It is worth highlighting that Los TIGRES is a U.S. funded, trained, and vetted Honduran special forces unit focused on fighting criminal gangs and drug trafficking. 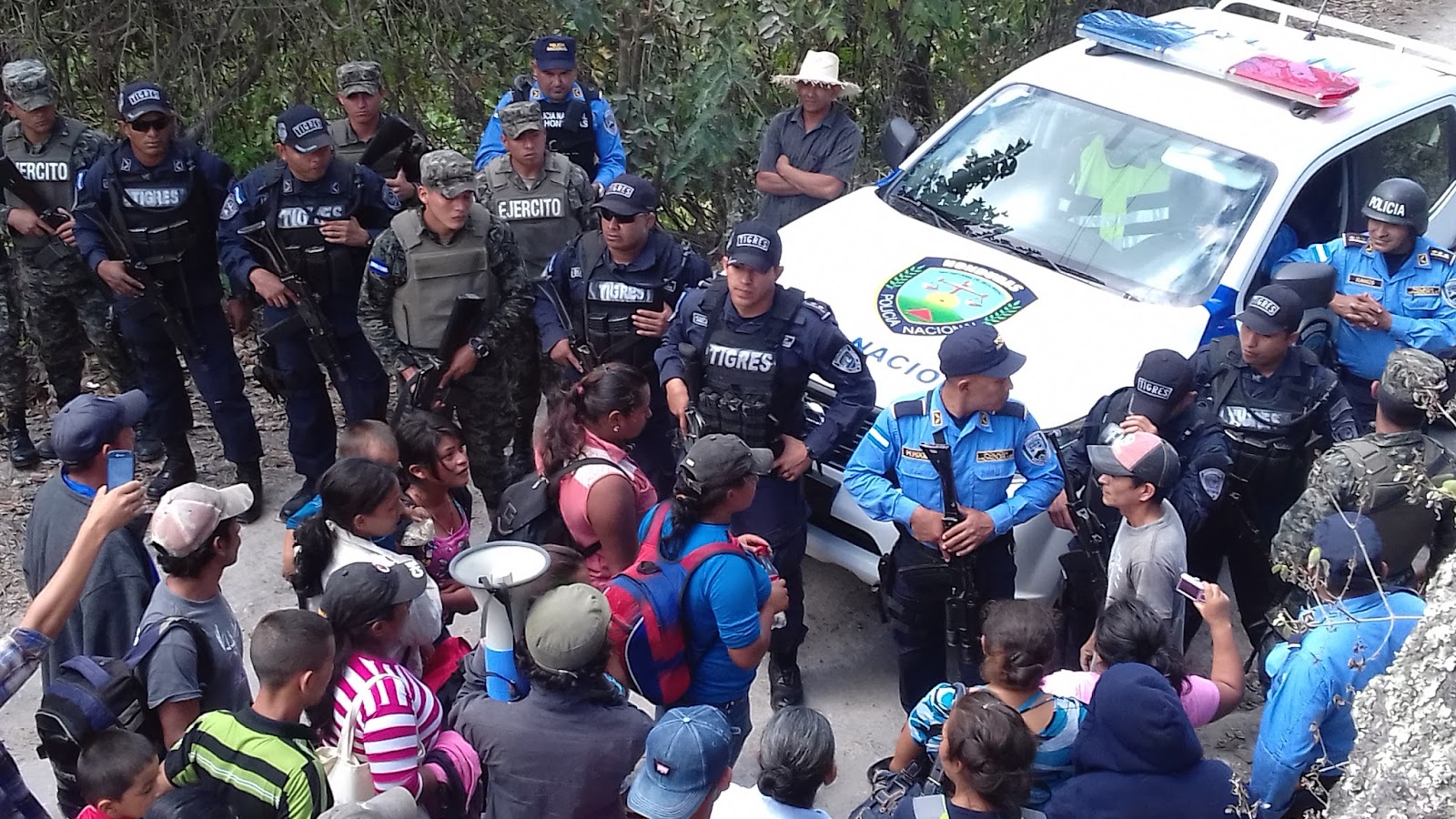 The U.S. financed special forces unit, Los TIGRES were seen among the armed actors of the state. Photo: Witness for Peace As a nonviolent organization, we recognize that the militarization in Honduras–being backed by the U.S.– is sowing terror in the society and becoming a profitable business. Further, the real solution for sustainable peace will come from structural changes to institutions and policies to end impunity and create opportunities which promote peace such as employment, integral security for all citizens and access to justice.

A Call to Action

We call on the U.S. State Department and U.S. Embassy in Tegucigalpa, Honduras to go to Rio Blanco and observe the human rights situation. The Embassy should investigate the heavy militarization of the area, the role of DESA-Agua Zarca in human rights violations, and Honduran armed units or individuals, particularly Los TIGRES, that are receiving U.S. government material or financial support and has or is committing human rights abuses in Rio Blanco.